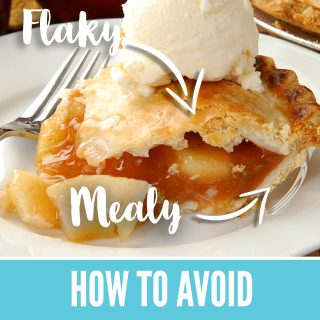 Everything you ever needed to know about making pie crust. Which dough to use (mealy or flaky), for single crust, double crust, and no-bake pies

So often when I read about the “perfect pie crust recipe” the recipe only includes one type of pie crust. This confused me because when I was learning how to make pies in pastry school, we learned to make two types of pie crust. The mealy dough which was very similar to a shortbread crust for pies that were very liquidy and flaky pie dough for cream pies or double-crust pies. Each crust plays an important part and it’s important to know which one to use and why to avoid pie fails like shrinking, cracking and soggy bottom crusts.

So if you’re having any of these problems, keep reading and learn how to make the perfect pie every time. For real!

What is mealy dough?

Mealy dough is made from flour, salt, butter egg and water. The dry ingredients are blended together with the butter to form a mealy texture before adding in the water to bind it all together. The butter pieces are very small which creates a dough that is very good at repelling moisture from liquid fillings like pumpkin or un-cooked fruit fillings.

The mealy dough is most often used for the base of double-crust pies or for custard-based pies.

What is flaky pie dough?

Flaky pie dough is made with flour, salt, butter, and water. The butter is left in larger chunks so that when the crust is baked, you get more flaky layers than you would from baking mealy pie dough. Flaky pie dough is incredibly tender and melts in your mouth when you bite into it but is not very good at repelling water because the butter pieces are so large. The liquid can easily seep through the dough, causing soggy, undercooked bottoms.

How do you make pie dough?

Whether you are making mealy dough or flaky dough, it’s important to keep the butter cold. I grate my cold butter right into the flour so the butter stays cold. Remember, don’t over-mix the pie dough. Over-mixing will cause the gluten to get really tough and your dough will not be as tender. It’s better to have a few cracks when you are rolling out then to over-work your dough for the sake of it looking pretty.

Once you have the butter incorporated, add the water in small amounts and gently mix with your hand to distribute the water. Once it’s barely sticking together, stop. Press the mixture together, wrap in plastic wrap and let the dough chill for at least one hour or overnight. This gives the flour time to absorb the water without activating more gluten.

Resting also allows the gluten that has activated to relax so that your dough is easier to roll out and it won’t spring back.

Tip: Flatten your dough into a disk instead of leaving it in a ball so that it is easier to roll out later.

Once your dough has rested, let it warm up a bit at room temperature. It should be warm enough that when you press down on it with the rolling pin you can make an impressing but firm enough that the butter isn’t melted and soft.

Work quickly to roll out your dough. If your dough is sticking, add more flour to your rolling pin or roll between parchment paper. Dough should be rolled out to 1/8″-1/4″ thick.

How do you prevent pie dough from shrinking?

After you have the dough rolled out, transfer it to your pie plate. You can use glass, ceramic or metal. I like metal pie plates because they really brown the bottom of the crust well but glass plates are also really great so you can see if the bottom crust is done baking.

Whatever plate you use, a little shrinking is normal. In fact, that’s how you know when your pie is done baking. When the crust shrinks away from the sides. If it hasn’t pulled away from the sides, no matter how brown and beautiful it is on top, the bottom is still under-cooked and will be soggy.

How do you prevent the crust from shrinking too much?

How do you blind bake pie dough?

The biggest challenge when blind baking pie dough is keeping the sides from collapsing down the sides. These are the steps to blind baking a pie successfully.

How do you make a double-crust pie?

To make a double-crust pie, fill your pie pan with mealy pie dough as usual and then chill while you prepare your flaky pie dough. Roll out your flaky pie dough and cut into 1″ strips if desired for a lattice crust. Brush the mealy dough with egg wash (1 egg or egg white mixed with 1 Tablespoon of water and whisked).

Arrange your lattice or place your second layer of dough on top of the mealy dough and trim off the excess dough. Press the two doughs together and flute the sides or press with a fork. If using a single sheet of pie dough, make sure you cut in some vents to allow air to escape.

Brush the surface with more egg wash and some sanding sugar if desired for texture, color, and flavor before baking.

How do you prevent the pie crust from getting too brown?

If your pie crust has not shrunk from the sides of the plate and is getting too brown, you can cover the top of the crust with some aluminum foil or you can move one of your oven racks to the top of the oven and put a sheet pan or piece of aluminum foil on the rack to prevent browning. I prefer to do it this way so that I don’t accidentally damage my pie.

You can also purchase pie crust protectors that sit on top of the pie crust as it bakes to prevent browning.

So hopefully this has answered a lot of your questions on how to make the perfect pie crust. Get my recipe for mealy dough and flaky pie dough below.

For more pie recipes, check these out!