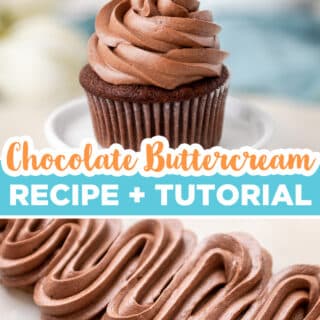 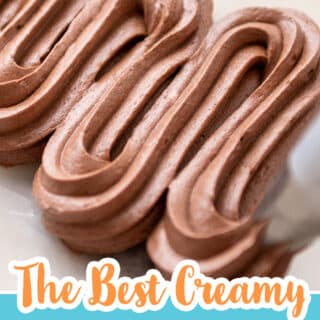 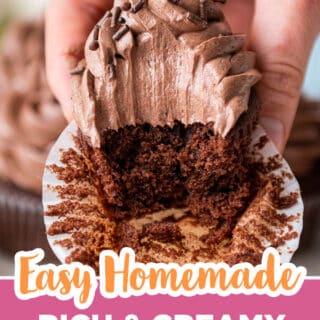 This homemade chocolate buttercream frosting recipe is very creamy, light, and super easy to make. A good quality cocoa powder, pasteurized egg whites, powdered sugar, and butter create a fluffy buttercream that pairs well with chocolate cupcakes, vanilla cake, or classic yellow cake. If you’ve never made an egg-based frosting before, your life is about to change for the better. 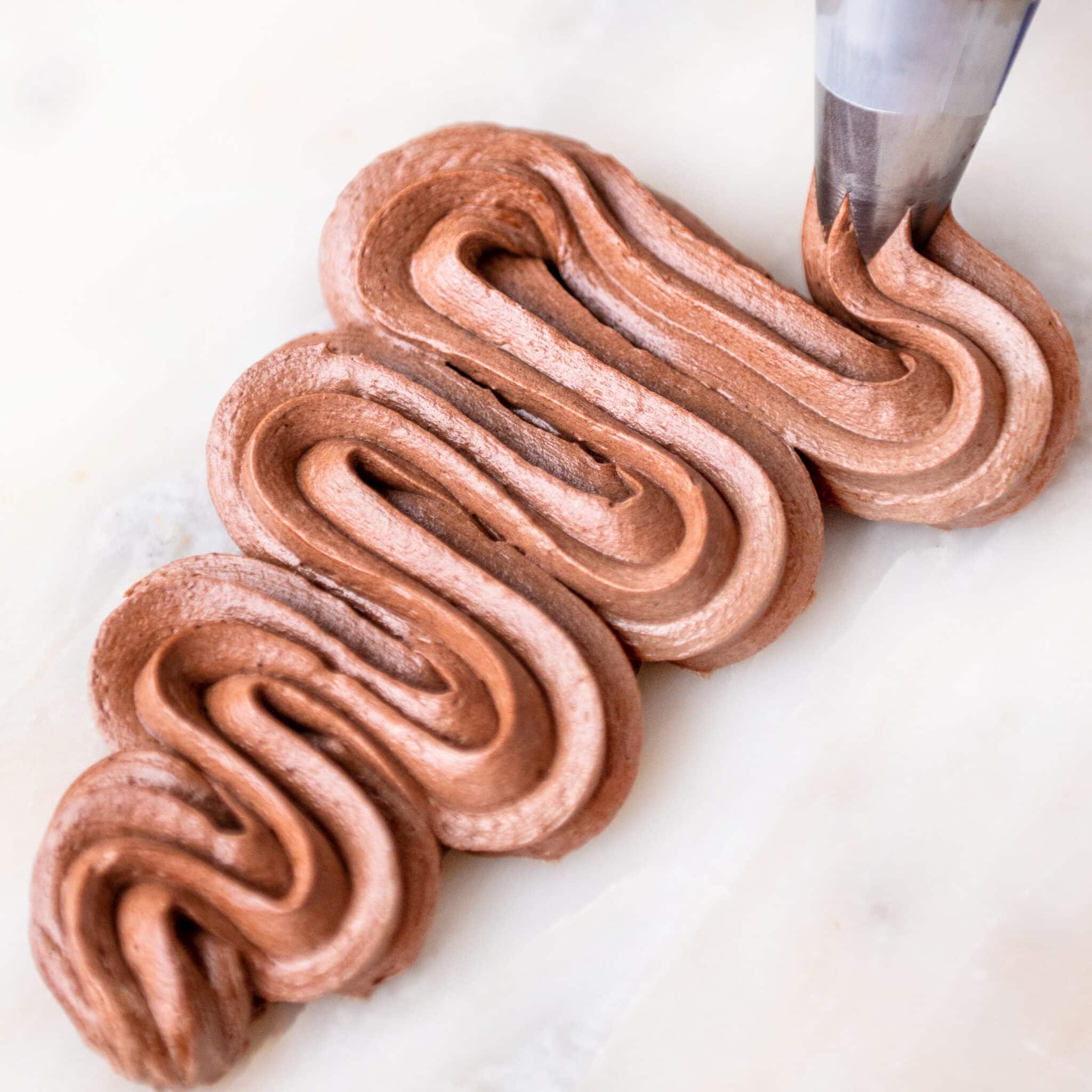 This frosting is like a mock-Swiss meringue buttercream. Instead of cooking egg whites and granulated sugar, we’re skipping that step and using powdered sugar and pasteurized egg whites. It’s super creamy and fluffy, is perfect for frosting cakes and cupcakes, and can be left at room temperature for up to 24 hours. 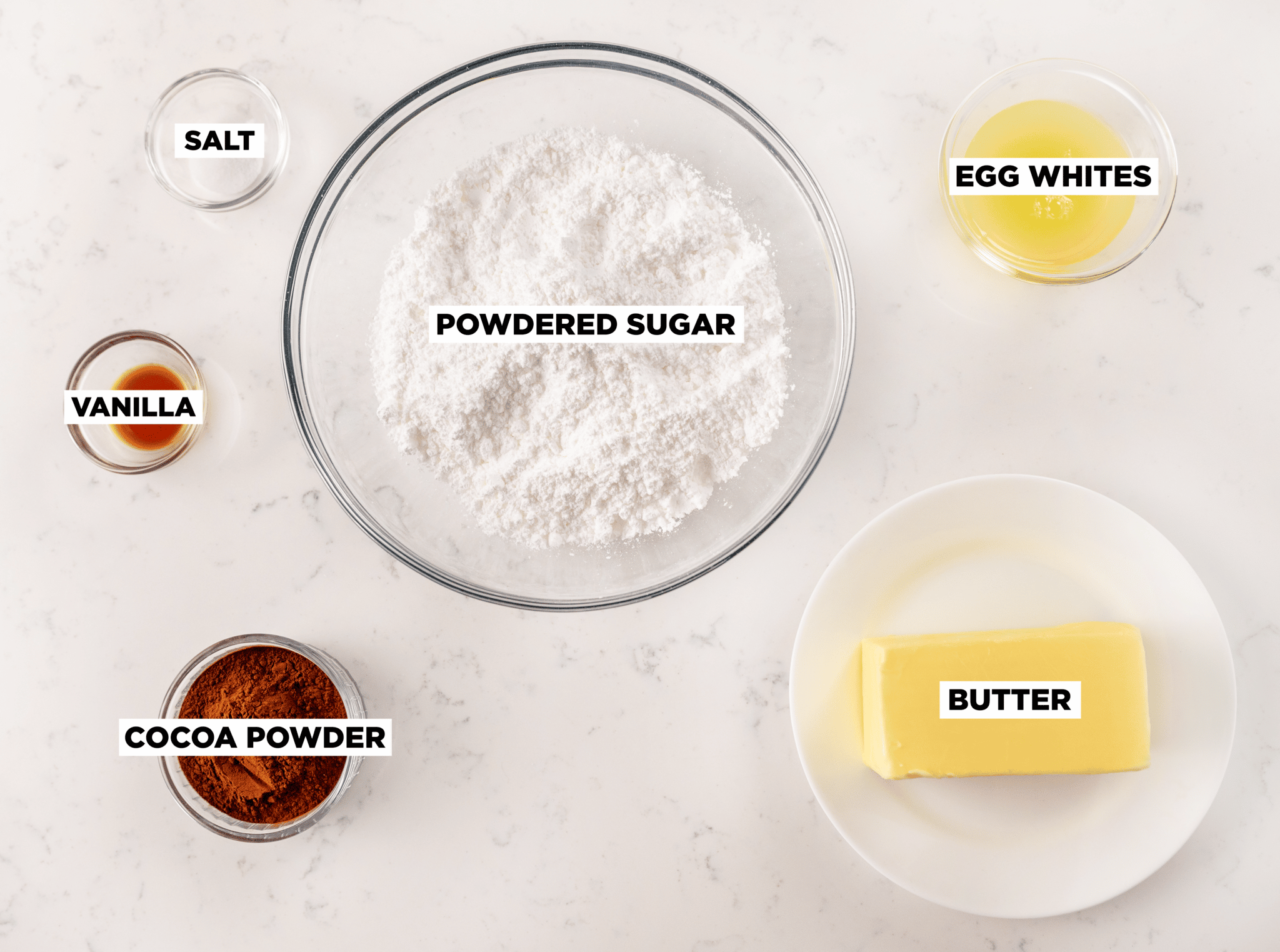 This delicious frosting comes together with just 6 simple ingredients. No surprise here, there is a lot of butter in this “butter” cream recipe, so it’s best to use high-quality butter. Unsalted butter is best for baking so that you can control the amount of salt in the recipe. Just a pinch of salt will go a long way.

Many meringue-based frostings use eggs as a key ingredient. Pasteurized egg whites are heat treated and are safe to eat without cooking and normally come in a carton. If you only have fresh eggs, I suggest making my chocolate Swiss meringue recipe.

Why does my chocolate buttercream look curdled or broken?

Can you make chocolate buttercream frosting with melted chocolate?

Yes, instead of using cocoa powder, you can melt down about 4 ounces of chocolate, cool it to about 80°F, and add it to your finished buttercream. Be careful to not add your chocolate when it’s too hot or it’ll melt the butter in the frosting. The better the chocolate the better tasting the buttercream will be. I personally love Valhrona or Cacao Barry chocolate.

Why does my chocolate buttercream get darker overnight?

Is this a crusting chocolate frosting recipe?

Will this chocolate buttercream hold up under fondant?

Yes, this chocolate buttercream is great under fondant as long as you chill your cakes. It will go on super smooth on your cake and is delicious paired with my homemade marshmallow fondant recipe (LMF).

Can I freeze this chocolate buttercream?

This buttercream will last in an airtight container frozen for up to 6 months or refrigerated for 2 weeks. When you’re ready to use it, mix it on medium speed with the paddle attachment, microwave about 1 cup until it’s just barely melted, and pour it back into the buttercream to make it smooth. 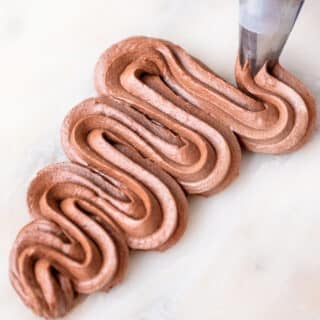 This chocolate frosting is an easy recipe that comes together in 20 minutes and tastes like chocolate ice cream! It's based on my easy mock-Swiss meringue vanilla buttercream and is perfect for frosting wedding cakes, filling birthday cakes, using under fondant, and swirling on cupcakes.
5 from 42 votes
Print Rate Never Miss A Cake
Prep Time: 20 mins
Total Time: 20 mins
Serves: 6 cups
Calories: 874kcal
Author: Elizabeth Marek