Think back to when you use to make cookies over the holidays. What was your favorite part? Besides eating them, mine was definitely decorating them! We would normally get the white canned frosting and my mom would die some in a few different bowls to give us color options. Then the messy awesomeness of the decorating would commence. My brother and I would come up with some crazy looking snowmen, that’s for sure. Now I prefer this royal icing as my decorating tool. It is so elegant looking and smooth.

Is it safe to eat royal icing?

When it comes to eating frosting, there are a couple of tips that you should know about. Using raw egg whites in royal frosting is fairly common. When you make royal icing you should use pasteurized eggs. According to research, the salmonella is primarily found in the yolk of the egg, but it is possible that it can be in the whites too. You also have to keep royal icing, that is made with raw egg, in the fridge.

As kids, we would commonly fight over who got to lick the spoon when my mom would make any kind of yummy dessert. In the many years I did that, I never got sick from the raw egg. I am not making light of food poisoning, I have seen some go through it an it looks like hell. So to be safe. This is why I use meringue powder in my royal icing recipe. No chance of salmonella.

What can I use instead of cream of tartar in royal icing?

If you do not have cream of tartar on hand but do have a lemon, you can use equal parts lemon juice or even vinegar. Using these will not affect the taste of your royal icing, as a matter of fact, these can actually enhance the flavor. You can also use corn starch in place of cream of tartar, which I have heard has been done and you can get away with it just fine.

How long does it take for royal icing to dry?

If you’re applying the royal icing in a thin layer it can dry fairly quickly. I give myself a 15 minute widow to decorate a half batch. that is if I am doing          If I want a layered look. Such as raised dots or lines, I let the cookies set for a few hours, or even over night. It can take 4 to 6 hours for the frosting to dry and set completely.  A thick layer can take a few days to dry completely.

How should royal icing be stored?

Can you freeze cookies with royal icing on them?

Iced cookies can be frozen in layers. With royal frosting you want the cookies to set and dry completely before storing in the freezer. You can even put wax or parchment paper in between the layers, just to be safe. You’ll want to put them in a container that has as little air as possible to avoid freezer burn. You also don’t want to freeze them for long since the cookies can absorb that “freezer taste” and no one likes that.

What is the difference between icing and frosting?

Frosting is normally used to coat the outside of a cake or go on top of brownies. It is more buttery to the taste and softer to the touch, fluffier and thick. It hardens, yes, but not as much as royal icing. It can be harder to stack a set of cookies that are frosted instead of iced. 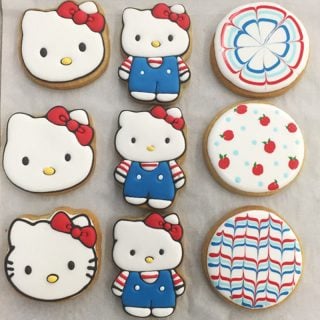 Susan Trianos brings up her secret recipe for decorating high-end sugar cookies. This royal icing can be thinned and used for flooding cookies with icing after creating dams from the normal royal icing. Use the regular and thinned icing recipes together to create perfect dots with no peaks, floods of color, stripes and more!
Prep Time20 mins
Total Time20 mins
Print Recipe
Servings: 3 cups