Easy Buttercream Frosting That’s Not Too Sweet, Super Creamy and Easy To Make

Super easy buttercream frosting recipe! Technically a mock swiss meringue buttercream that requires no heating of the egg whites. Light, creamy, and not too sweet. It’s my go-to recipe for all my cakes and cupcakes. It pipes beautifully and works well under fondant.

The first buttercream I ever made was from an old Wilton recipe book. Powdered sugar, shortening, and vanilla. I struggled SO hard to get my edges smooth and crisp like the photos I saw in the fancy cake decorating books but I always ended up with mega cake fails.

It wasn’t until I went to pastry school in 2010 at Oregon Culinary Institute that I first heard of other kinds of buttercreams. I’ll never forget the day we made Swiss Meringue Buttercream and we had to frost our cake by holding it in one hand and icing the cake with a spatula in the other. NO turntable!

I was like, there is no way this is going to work. But I lifted that cake up and began frosting as my chef instructed and I could not BELIEVE how smooth it went onto my cake! 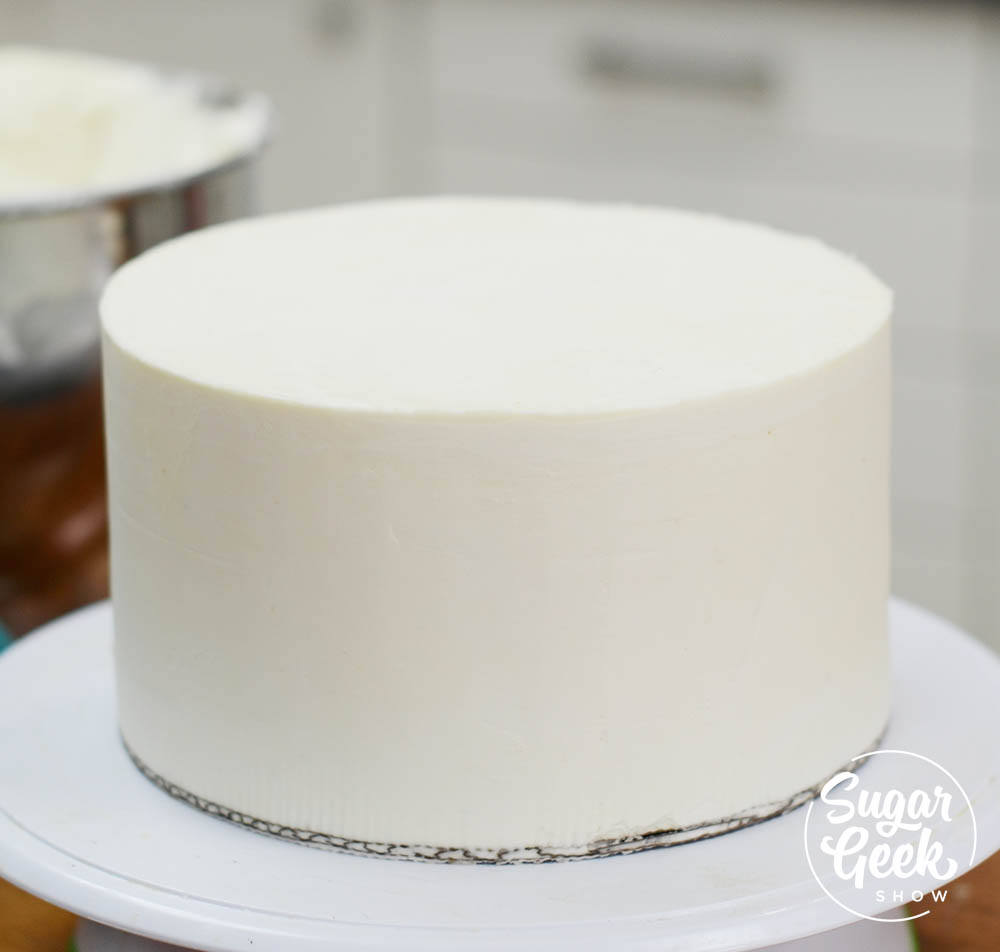 Then I tasted it…

Not too sweet, super silky, melt on your tongue goodness!! For the next 6 years I only made SMBC for my cakes which involves a lot of heating of egg whites, whipping, cooling and repeat. I WISH I had this recipe back then! It’s so much easier!

How much easy buttercream frosting do I need?

*NOTE: this recipe has been updated to make less buttercream for the average home baker, if you want the bowl to be full, double the recipe)

This easy buttercream frosting recipe makes a LOT (12 cups) which basically fills the bowl of a standard KitchenAid mixer. The reason for this is because when your mixing bowl is filled to the top, it’s easier to get all the air bubbles out. You can freeze leftover buttercream or store it in the fridge for a week. Just bring to room temp and mix with the paddle a few minutes to make it creamy again before use.

How to make easy buttercream frosting

Because of the large amounts of sugar in buttercream frosting, it can be left at room temperature for 2 days but I always recommend you refrigerate leftover buttercream when not in use to extend the life of the buttercream. If you are not going to use buttercream for more than a week you can freeze it for 6 months or more.

To use frozen or refrigerated buttercream, let come to room temp then mix on low with the paddle attachment to make it creamy again. Do not whip or you can incorporate too much air.

If your buttercream frosting has been sitting at room temperature for more than a day, mix with paddle attachment before use. Buttercream tends to get spongy after 24 hours and looses it’s creamy texture.

Is this easy buttercream frosting good for using on wedding cakes?

Yes! I love using this buttercream frosting for my wedding cakes. It can even be covered with fondant. Always chill your cakes before covering in fondant.

When I make my cakes, I keep them refrigerated for stability. Once the cakes are delivered, the buttercream comes to room temperature and is soft enough to enjoy. Hard buttercream is not great to eat. Learn to make this semi-naked wedding cake on the membership site.

What Kind Of Butter Is Best For Easy Buttercream Frosting

Now if you’re like me and you’re making tons of buttercream frosting for huge cakes, you don’t want to go full on plugra (the best butter ever) because it get’s expensive really quick but if you try to go super cheap and use really low-quality butter or shortening, you’re going to taste that greasy aftertaste in your mouth. Not good.

What Kind Of Flavoring Do You Use For Easy Buttercream Frosting

Same thing with the vanilla. Vanilla is SUPER expensive right now thanks to a vanilla bean shortage so you have to be smart about. You might not want to go putting a vanilla bean into every batch but it don’t go leaving it out all together.

I get my vanilla from Costco and get a pretty decent deal. You can also supplement your vanilla with almond extract or you can try making your own vanilla extract from vanilla beans.

You can use any type of flavoring for your easy buttercream frosting, Emulsions and extracts that are not “artificial” will always taste better.

You can make chocolate buttercream frosting into a delicious chocolate version by adding in about 1/4 cup of your favorite cocoa powder. I like dutched cocoa powder because it has a nice rich chocolate flavor.

Pro-tip! Most buttercream frosting that uses real butter will look a little yellow at first. This is normal! To counteract that yellow tint you can add a TINY drop of purple food coloring. I know it sounds crazy but it really does work and makes your yellow buttercream look really white!

Why is my easy buttercream splitting?

The buttercream splits because it’s too cold. Take out 1/4 cup of the buttercream and melt it in the microwave until it’s just melted and then whip it back in. That little bit of warm butter helps it all come together again.

My buttercream is too soft, what can I do?

Buttercream is soft or firm depending on how warm it is. If it’s too soft, it could be your butter was too soft when you added it in or the mixer warmed it up. Put the buttercream in the fridge for 20 minutes then whip it again and it should firm back up.

How to make buttercream flowers

Ermine frosting (similar taste to easy buttercream but no eggs)

Delicious, rich and easy buttercream frosting recipe that anyone can make. This is not a crusting buttercream. It is meringue based so it has a slight shine and chills nicely in the fridge. Takes 10 minutes to make and is fool-proof! Light, fluffy and not too sweet.
4.87 from 117 votes
Print Rate
Prep Time: 5 mins
mixing time: 20 mins
Total Time: 10 mins
Serves: 4 cups
Calories: 849kcal
Author: Elizabeth Marek